OUR MEMBERS FROM ACROSS THE COMMONWEALTH

CREATE PATHWAYS FOR NATIONAL-LEVEL CHANGE WHERE THOSE PATHWAYS DON’T EXIST.

We challenge power structures, disrupt narratives of the past, and work with lawmakers, the public and private sectors, and other civil society movements and partners to demand accountability and create positive and enduring change for LGBTI+ people.

The creation of TCEN enabled LGBTI+ people around the Commonwealth to raise their voices against the damaging impact of British colonial laws, especially the criminalisation of same-sex relations, and to advocate for reform in Commonwealth meetings including Heads of Government meetings.

The idea for a transnational network of LGBTI+ organisations in the Commonwealth emerges and a small working group is formed to make it happen. By the end of the year, 30 member organisations from 25 Commonwealth countries have joined.

We facilitated the “LGBTI Human Rights in the Commonwealth” conference, to coincide with the opening of the Commonwealth Games in Glasgow. The event drew speakers from across the Commonwealth, and involved a range of activists, policymakers and organisations in discussion of how to improve the realisation of human rights for LGBTI+ people in Commonwealth states, and the role of Commonwealth institutions themselves.

As a result of advocacy with the Commonwealth institutions and key Commonwealth governments, a delegation of nine TCEN members from across the Commonwealth were invited to participate in the Commonwealth Heads of Government Meeting (CHOGM) in Malta that year. This was the first time the rights of LGBTI+ people were consistently raised at a CHOGM, by a group that was diverse in terms of identity, ethnicity, gender, faith and country of origin. Some highlights include:

Donnya Piggott, a young TCEN activist from Barbados, spoke at the formal meeting between civil society and Commonwealth Foreign Ministers, about the LGBTI+ experience in Barbados – a first in that space.

The People’s Forum included two sessions focused on LGBTI+, a first in its history. At the Women’s Forum, TCEN representatives also made the only dedicated presentation on sexual orientation and gender minority women’s issues. These interventions facilitated direct, voluntary dialogue between TCEN activists and member state representatives who they would not normally have access to.

TCEN also successfully advanced language supportive of the rights of LGBTI+ people. The “Malta Declaration” from the People’s Forum used suggestions directly from TCEN’s key advocacy positions, and positive language was included in the People’s, Women’s and Youth Forum statements as well. Significantly, the Leaders’ Communiqué contained phrasing emphasising “the need to protect individuals from all forms of violence and discrimination”.

Publication of “A Commonwealth Toolkit for Policy Progress on LGBT+ Rights”

We held our first members’ meeting since 2015 and developed our first collective advocacy strategy, for the 2018 CHOGM in London.

TCEN was accredited to the Commonwealth in June. We are the first and only LGBTI+ focused group to ever receive this status which recognises commitment to the values and principles of the Commonwealth as laid out in its Charter.

We held our first regional meetings, in Malta and Johannesburg, to bring members together and help consolidate the network into a movement in support of members’ national and global work. Attendees met with the Maltese Prime Minister Joseph Muscat and former President of South Africa Kgalema Motlanthe, among others.

New mandate-holder of the UN Independent Expert on protection against violence and discrimination based on sexual orientation and gender identity Victor Madrigal-Borloz’s first stop: a meeting with TCEN about the lived experiences of LGBTI+ people across the Commonwealth and how the mandate can support the Network’s efforts.

We met with Commonwealth Secretary-General Patricia Scotland to discuss approaches to advancing LGBTI+ rights and the Commonwealth institutions’ role in their protection and promotion – a first such meeting.

Melusi Simelane, representing a TCEN member from Eswatini, presented on the effects of criminalisation on the safety of LGBTI+ communities to the gathered high-level representatives of all Commonwealth Member States at the Committee of the Whole before the CHOGM, a first in this space.

Zeleca Julien, representing a TCEN member from Trinidad and Tobago, delivered a keynote address linking justice for LGBTI+ people to gender justice to hundreds of delegates from across the Commonwealth during the opening plenary session of the Women’s Forum, alongside the Commonwealth Secretary-General and the UK’s Minister for Women and Equalities.

As a result of influencing by Kaleidoscope Trust on behalf of TCEN, UK Prime Minister Theresa May expressed her “deep regret” for the legacy of discrimination and violence that colonial-era legislation inflicts on people across the Commonwealth in front of thousands of attendees from all over the Commonwealth at the London CHOGM’s Joint Forum Plenary. The UK Government also allocated £5.6m over two years to help create fairer and more inclusive Commonwealth societies by supporting countries seeking to reform laws that discriminate against women, girls and LGBTI+ people.

A group of TCEN members were invited to a private meeting with Canadian Prime Minister Justin Trudeau, to discuss what his country can do to support LGBTI+ equality across the Commonwealth.

We held our biggest-ever Global Conference, in Mauritius, to prepare for CHOGM 2020. It marked the first time nearly all members of TCEN were able to convene at the same time since the network’s foundation in 2013, with 51 advocates from 36 member organisations representing 35 Commonwealth countries attending, and we produced our most ambitious strategy to date.

Despite being denied observer status, a TCEN delegation was nonetheless able to fruitfully engage with a number of stakeholders at the Commonwealth Law Ministers Meeting in Sri Lanka, including holding a side-event chaired by the Seychelles Attorney-General.

We won the ‘International Community Trailblazer’ award at the Gay Times Honours, in recognition of the network’s pioneering work.

Our Management Committee held a ‘TCEN Advocacy Week’ in London , the network formulated a specific set of policy priorities in the area of legislation, freedoms, and access to justice. These priorities were presented at a high-level roundtable attended by High Commissioners and senior officials from Australia, Belize, Canada, Cyprus, Malta, New Zealand, Seychelles and the UK, as well as at other events. 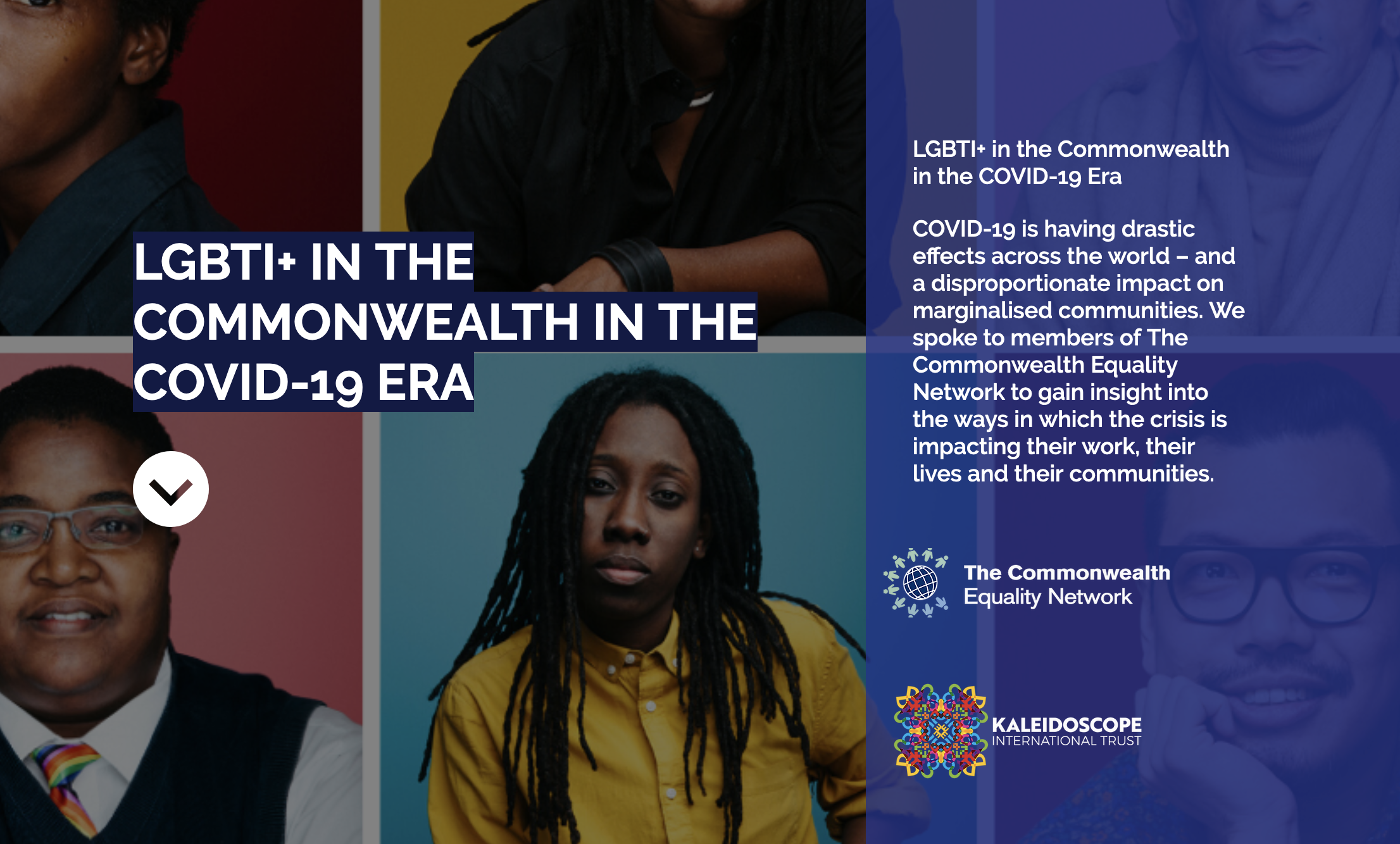 TCEN marks the International Day against Homophobia, Biphobia and Transphobia at the Commonwealth Secretariat

TCEN and Kaleidoscope Trust published LGBTI+ in the Commonwealth in the COVID-19 Era, a ground-breaking report documenting some of the challenges that LGBTI+ movements and communities across the Commonwealth face as a result of the pandemic.